Internationally recognized executive coach Lois P. Frankel and 2013 JWLF Keynote Speaker has long insisted that women develop a distinctive set of behaviors during girlhood that sabotages them as 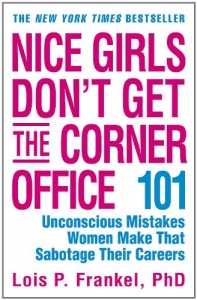 they build their careers. So what does Dr. Frankel’s New York Times best-selling book have in common with this summer’s block buster movie, Wonder Woman? A lot. At first it may seem obvious, sure Princess Diana of the Amazons is kicking butt and making us want to grab a sword and jump in with her. But there were many times in Wonder Woman’s life where she could have succumbed to the pitfalls so many other women fall into and ended up living a “limited life” according to Dr. Frankel.

The Nice Girl Syndrome
First off, Wonder Woman, Diana Princess of the Amazons, starts out as a “nice girl,” her mother Queen Hippolyta doesn’t want her to learn the fighting techniques that have made her tribe of women so powerful and dominant. She wants her to avoid conflict and the threats of the outside world. That is part of Diana’s “socialization” that could have led her to live a limited life as a girl rather than a woman. Dr. Frankel points out in her book that when women &quot;live a life circumscribed by the expectations of others, we live a limited life. What does it mean to live our lives as girls rather than women? It means we choose behaviors consistent with those that are expected of us rather than those that move us toward fulfillment and self-actualization.&quot;

Frankel also explains that women make Mistake #2 Women Have an Inordinate Need to be Liked, and often miss opportunities to get the career-improving assignments or promotions because they are reluctant to showcase their capabilities, hesitant to speak at meetings, and working so hard that they forget to build the relationships they need for long-term success.

To Diana’s credit she realizes early on that there is more to her ambitions than to be liked and seeks out a mentor in her Aunt who agrees to train and prepare her for her upcoming challenges.

A Woman’s Place in a Man’s World
Once Wonder Woman decides she will take on saving the world and arrives to rescue mankind, she quickly recognizes that the planet is indeed a “man’s world.” Diana is repeatedly relegated to a womanly role among her male counterparts. She’s even outfitted with traditionally demure clothing, that has her 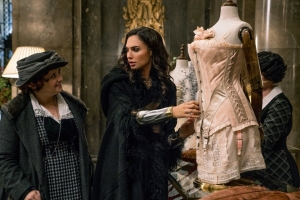 wondering out loud, how she will fight in that? When the team heads into battle and is halted at enemy lines, the men in the group tell Diana that she can’t go any further. Diana realizes that she will not be able to do the job she came to do if she allows the men around her to put her in this “woman’s place” box (or outfit). Look at how many challenges Diana faced at this point already, instructed by the men around her of her “role” in the group, outfitted with limitations, and told that the obstacles are too big for her to overcome. Dr. Frankel points to that in her book as Mistake #96: Accepting the Fait Accompli. That’s French for “an irreversible or predetermined decision.” How often do you see a male co-worker settle for a “that’s just how it’s done around here” when it comes to their advancement or success?

To Diana’s credit, she tears down the limiting set of walls they’ve set up around her. One of the most famous scenes in the films is her going it alone into “No Man’s Land” to capture the enemy trench and allow her colleagues to liberate the village. She didn’t apologize for it nor ask for permission, in fact she 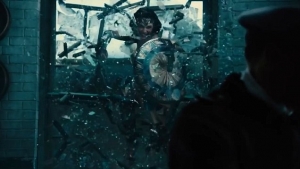 literally breaks through a glass window (close enough to a ceiling to illustrate the point). Dr. Frankel makes the distinction that stating your intent versus asking for permission puts you in a position of respecting yourself and others and allows you to pursue opportunities without allowing others to put up obstacles. Mistake #59: Asking Permission. Inform others of your intentions; don’t ask forpermission. By informing others you show respect for their need to know, but without your action being contingent upon their approval.

Wonder Woman becomes the picture of empowerment through her own strong sense of self and confident determination. Dr. Frankel would commend Diana for identifying herself as someone with power and the know-how to occupy the corner office!